A Pullman area man has been arrested for allegedly conducting a major string of local storage unit burglaries.  Whitman County Sheriff’s Deputies responded to a report of a storage unit break-in in Oakesdale Monday morning.  A witness was able to provide deputies with a description of the suspect and his vehicle.  Deputies tracked the lead to a home on Country Club Road just South of Pullman.  The sheriff’s office then executed a search warrant at the residence and allegedly found several items stolen from recent storage unit burglaries from the Quad-Cities region.  Deputies arrested 45 year old Jerry Glass for allegedly breaking into the units in Oakesdale, Clarkston, Colfax, Pullman and Moscow over the past several months.  The sheriff’s office recovered nearly 40 guns from the home at least 5 of them are believed to have been stolen from a unit in Moscow.  Glass was booked into the Whitman County Jail in Colfax for felony second degree burglary, possession of burglary tools, possession of stolen property, possession of stolen firearms and possession of methamphetamine.  More charges are expected.  Deputies are still investigating. 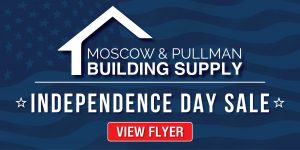