A Lewiston man with several felonies out of Washington and Idaho is now in jail after leading police on a high-speed pursuit near Garfield on Friday.

At around 5 p.m., Garfield Police attempted to stop a vehicle driven by 26-year-old Taylor Shell.

Marshal Handley recognized Shell from a recent booking photo and attempted to catch him while checking the status of his warrants.

Shell immediately started driving recklessly, according to the police.

This high-speed pursuit lasted about 15 minutes until deputies were able to successfully deploy spike strips. The vehicle continued driving several miles before stopping south of the town of Palouse.

Shell was arrested and taken into custody for Felony Eluding.

The passenger, 23-year-old Cassidy Stadtmiller, was also arrested on a felony warrant out of Clarkston.

Police say they found heroin and a large amount of used paraphernalia in the vehicle. 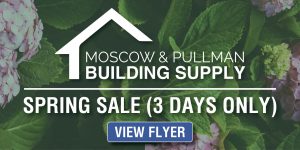